Everything old is new, and yet, the truly innovative is never old. The key is in the recursion. The fibers with which the modern storyteller's yarn is spun are harvested by retting the plants born of seeds dropped by tapestries such as the pair I've shown you. To what degree the freshly woven tapestry may be considered innovative shall be governed by the composition of the threads and the pattern of the weave. The crux of innovation is seed diversity. What might it look like, the dragon one might weave with threads of both Indo-European and Sino-Tibetan ancestry?

As it turns out, I've already shown you how such an amalgamation might present itself. Remember that cute little cetus mosaically immortalized by the Greeks that I showed you? Well, it's highly f$&kin' probable that threads of his story were woven into our cute little tapestrified cloud dragon. You see, before Wang Fu was rattling off the dragon's nine similarities, Chinese dragons were looking kinda like the ones carved into the side of this fish: 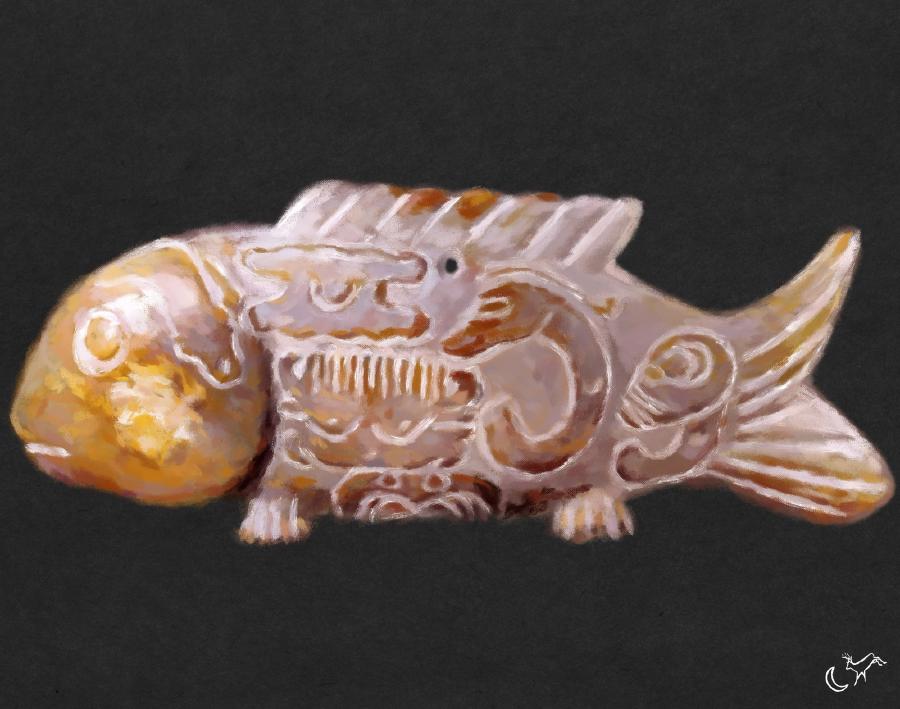 What changed? Hellenistic Greece expands east into Central Asia under Alexander the Great, some time in the fourth century BCE. The tail end of the second century BCE would see the Han Dynasty expand west into Central Asia. The primary point of contact would be Dayuan, populated by Greek colonists and Greek descendants displaced by the Persian Empire. Emperor Wu commissioned Zhang Qian to take an embassy west, which arrived in Dayuan sometime in 130 BCE. After some years of mutually beneficial trade, Dayuan would send envoys east to the Han court. Arrogant and overly confident, these envoys would dismiss adherence to Han ritual and decline Emperor Wu's trade offer for some of them Ferghana horses.

Emperor Wu's desire for these powerful, blood sweating stallions was nuttin' to f' wit'. He required them to combat his nomadic rivals. The soil in China lacked selenium. The horses they bred were underdeveloped. Those Zagros Mountain horses, on the other hand, well, Chao Cuo 晁錯 puts it this way:

Which amounts to the following in English:

In climbing up and down mountains and crossing ravines and mountain torrents, the horses of China cannot compare with those of the Xiongnu.

Chinese horses, you see, were too weak to support the Chinese soldier. Thus began the War of the Heavenly Horses. Han's second expedition army would finally take Dayuan around 102 BCE, opening up the Silk Road, upon which our Greek sea serpent friend's likeness would march its way into the minds of Chinese artists interested in such things. It's at this point that the cute little cloud dragon, as we've come to know him, begins replacing the neolithic representations like those born by that fish. Long snout, bridged nose, pointed ears, horns, beard, coiled reptilian trunk equipped with claw-footed appendages, those supernal lumps–these become part of the story. The backfins alone were enough to sell me on the cross-bred threads.