My mind gleans meaning via metaphorical odyssey. This particular expedition's point of origin practically presents itself. Threads are but thin yarns, after all, and what are myths if not stories? Let us explore the storyteller and the threads of thought with which his yarn is spun.

The storyteller spins a yarn for transmitting select information as a recognizable pattern from which meaning may be gleaned. The raconteur, with his hanks of yarn, is a weaver—carefully crossing threads until a tapestry takes shape that tells a thousand stories. There are many such tapestries to be found in our histories whose shape is that of a dragon. I've painted two of them for us to examine and see what we find in their threads.

First, we'll look at the recursive story composition woven into a portion of the twelfth panel of the third Apocalypse Tapestry. 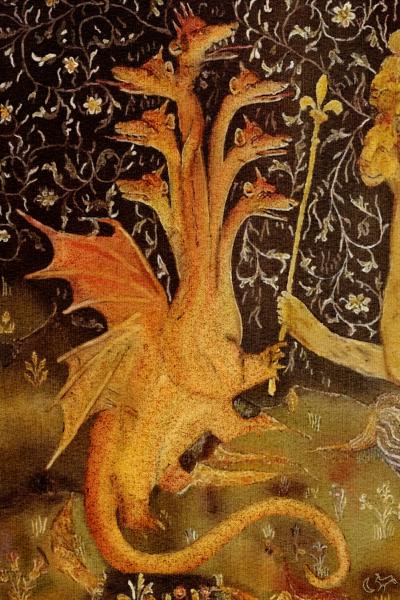 I suppose we should briefly go over what I mean by recursion before I continue. That this first example is actually a portion of a fourteen panel tapestry kinda plays into the whole recursive composition concept. Clearly, each panel tells a story. The tapestry in its entirety also tells a story. It's a story within which each panel's story happens to be embedded. A story made of stories. This, for those of y'all without a background in mathematics or computer science, is recursion in a nutshell.

Within each panel, the weaver tells a story, perhaps more than one. It's important to understand that the recursion does not necessarily, in fact, it's unlikely to, end with these stories. Short of the telling of a story fabricated entirely within the mind of a weaver that had managed to master textiles whilst whiling away on the deserted island upon which they'd washed up as a baby to be raised by some language-less species, the story told by the weaver incorporates stories that predate the tapestry's creation. If you aren't quite sure what I mean, I think you will be once we've dug in a bit. Time for some story extraction.

We needn't know the tapestry's origin, medieval France, to surmise that what stands before us (with a weird little buddy) is a western dragon. If you look past the head and wing count, he kinda looks like the dragon from that medieval manuscript. Had I shown you all eight of the panels from this tapestry in which our fella makes an appearance, many of the Indo-European dragon motifs would catch your eye, most notably the dragon's mastery over water, his harassment of a maiden (whose baby he wants to devour), and a bout with spear hero. How many stories, by the year 1375, must lay in the lineage of the western dragon?

Here's where it gets interesting, we've barely scratched the surface–for the majority of this tapestry was woven with yarn spun by John while in exile on the Greek island of Patmos. He was all:

You may (or may not) be familiar with John's story. Were he translated into English, he'd be all:

12:3 And another sign was seen in heaven, and behold, a great red dragon, having seven heads and ten horns, and on his heads seven crowns,
12:4 and his tail is pulling one third of the stars from heaven; and it threw them to the earth. And the dragon took his stand in front of the woman who was about to deliver, so that he might devour the child whenever it was born.

So, yeah, this isn't just any old dragon. This is that apocalypse. Those were passages from ΑΠΟΚΑΛΥΨΙΣ ΙΩΑΝΝΟΥ (pronounced The Revelation of John (and that's a wrap on pronunciation jokes)). This is f$&kin' Satan, as John lets us know a few passages later:

12:9 And the great dragon was thrown out, that ancient serpent, which is called the Devil and Satan, who deceives the whole world, he was thrown to the earth, and his angels thrown along with him.

The fella on the right is some bearionard John just calls beast. Our dragon, here, happens to be passing along his power (which I guess he keeps in a scepter ¯\_(ツ)_/¯). I better just let John explain:

Which not a one of you are gonna f$&kin' understand so here's a guy explaining what John explained:

13:2 And the beast which I saw was like a leopard, and the feet of it like a bear's, and his mouth like the mouth of a lion. And the dragon gave his power to him, and his throne, and great authority.